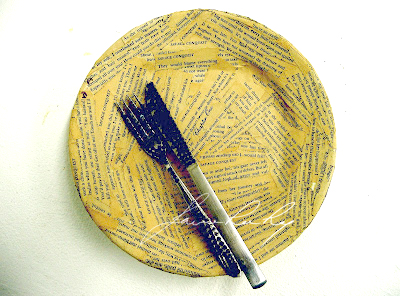 Also part of “Roaches and Flowers: War in the Home” (2007), Conversation Piece is a sculptural installation, constructed from a ceramic plate, mixed media, and a second-hand book found in a garage sale in Vermont. 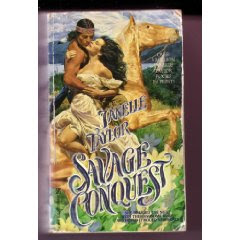 ‘Savage Conquest’ was one of those stereotypical novels housewives supposedly read, filling their heads with fantasy and daydream. The plot involved a wealthy European female who visited an untouched island to pursue a torrid love affair with an indigenous male. Her furious fiancé follows her to wage war on the islanders. (Cover of novel above).

This type of novel, in its deceptive fantasies which promote myths about social relationships and desire, is interrogated alongside the domestic space- another facilitator of myth and idealism. Stripping the book sentence by sentence, I pasted excerpts that referred to a physical war to create a psychological one. 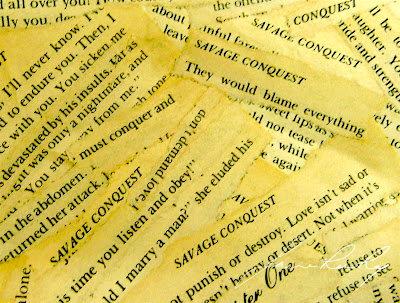 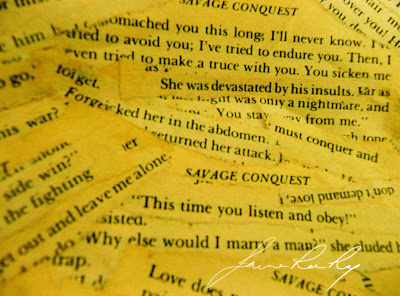 Key sentences were used to totally cover the plate, which was then installed in my studio on a table, set with cutlery, wine glasses, and a serving tray of clams.

These clams were placed upright and open, alluding to moths and Venus fly traps. Embedded in them were rusty nails, slim phallic symbols inserted in the Yonic clam. These hard-shelled creatures, which are fleshy in the interior, now lie forced open with threatening protrusions.

The installation alluded to a dinner party for two, but only one plate is present.